Castor oil has deep roots in India. It’s considered a go-to Ayurveda medicine for skin-healing, digestive problem, antibacterial agent and to boost immune functions naturally. Castor oil have also been used by folk healers around the world to treat a wide variety of health conditions for thousands of years and goes as far back as the ancient Egyptians, who used it to treat eye irritations and as a powerful natural skin care remedy.

Castor oil can be used as a moisturizer to treat or prevent dry, rough, scaly, itchy skin and minor skin irritations (e.g., diaper rash, skin burns from radiation therapy). It is a great emollient that soften and moisturize the skin and decrease itching and flaking. Looking for 100% pure and natural castor oil in Singapore? Check out our pure castor oil below or browse our range of carrier oils online.

What is Castor Oil

Castor oil is a vegetable oil pressed from castor beans. It is a pale yellow oil which has a very thick and sticky consistency and are well known as a source of ricinoleic acid, a monounsaturated, 18-carbon fatty acid. Castor-oil plant, (Ricinus communis), also called castor bean, is a large plant of the spurge family (Euphorbiaceae), grown commercially for the pharmaceutical and industrial uses of its oil and for use in landscaping. Probably native to tropical Africa, the castor-oil plant has become naturalized throughout warm areas of the world. The plants are chiefly cultivated in India, China, and Brazil, largely as the source of castor oil. 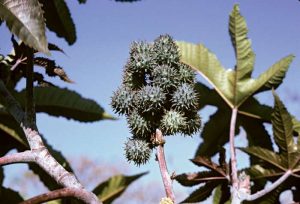 The United States Food and Drug Administration (FDA) has categorized castor oil as “generally recognized as safe and effective” (GRASE) for over-the-counter use as a laxative. Despite castor oil being widely used in an attempt to induce labor in pregnant women, to date there is not enough research to show whether it is effective to dilate the cervix or induce labor. Some pregnant women choose to take castor oil to hurry up their labor, although every doctor in the world recommends against this. Because it works as a laxative, it can actually cause dehydration if you take it without actually needing the laxative effects.

In naturopathy castor oil has been promoted as a treatment for a variety of human health conditions, including cysts. Castor oil has  also been used in cosmetic products like creams, moisturizer and in cold process soap making to increase lathering in the finished bar. It’s also been used to enhance hair conditioning in hair care products and for supposed anti-dandruff properties.

Studies suggest that many of castor oil’s benefits come down to its chemical composition. It’s classified as a type of triglyceride fatty acid, and almost 90 percent of its fatty acid content is a specific and rare compound called ricinoleic acid.

Ricinoleic acid is not found in many other plants or substances, making the castor plant unique since it’s a concentrated source.

Aside from its primary constituent, ricinoleic acid, castor oil also contains other beneficial salts and esters that mainly act as skin-conditioning agents. This is why, according to a report published in the International Journal of Toxicology, this oil is used in over 700 cosmetic products and counting.

Castor oil is a ‘wonder oil’ that has numerous benefits associated with it. Castor oil, which has been in use for hundreds of years for its anti-bacterial properties and anti-inflammatory properties, is known for its benefits. In fact, castor oil is used extensively in soaps, massage oils, cosmetics and medicines. Some of the famed uses of castor oil includes the application on face and hair.

Castor oil is completely natural and free of synthetic chemicals (as long as you use 100 percent pure castor oil, of course), yet it’s rich in skin-boosting ingredients like fatty acids.

Applying this oil to dry or irritated skin can help to discourage dryness and keep it well moisturized, since it prevents water loss.

It can also help with wound and pressure ulcer healing thanks to its moisturizing as well as antimicrobial and antibacterial properties. It mixes well with other ingredients like almond, olive and coconut oil, all of which have unique benefits for skin.

Lab studies have shown that castor oil is effective against many types of bacteria, including Staphylococcus aureus, Escherichia coli and Pseudomonas aeruginosa. Out of all the staphylococcal bacteria, Staphylococcus aureus is considered the most dangerous and can cause mild to serious skin infections and other concerning staph infection symptoms.

If you want to get rid of acne forever, you need to get to the source of the problem. Castor oil is a great natural home remedy for acne.

As it penetrates deep into the skin, it fights bacteria overgrowth that can clog pores, while softening and hydrating irritated skin at the same time.

As mentioned earlier, this oil has been shown to fight off  Staphylococcus aureus, which is linked to development of acne.

It can detangle hair as well and is even used to treat hair felting (a disorder in which hair becomes twisted and entangled as a hard stony mass).

Does castor oil regrow hair? Because it can improve blood circulation to your follicles, it may help to speed up hair growth.

This is why some people apply it not only to hair on their head, but also to eyebrows and eyelashes.

Some people believe that the most effective use of castor oil is castor oil packs or poultices. These might be able to help increase topical absorption through the skin’s pores.

You can make your own easily, or purchase a pre-made kit.

To make your own pack you’ll need a bottle of castor oil and a soft piece of fabric, such as flannel that can be found in health stores and online.

Where to Buy Castor Oil Locally

Are you losing your sleep over skin problems like acne, sunburn, stretch marks, yeast infections, fungal infections and warts? Are you suffering from hair breakage, split ends, dryness, itchy scalp and hair loss? Well, castor oil may just be your one-stop solution!

Where to Buy Fractionated Coconut Oil

END_OF_DOCUMENT_TOKEN_TO_BE_REPLACED

How to Use Castor Oil for Hair

How to Use Castor Oil for Hair Using castor oil may help your hair grow faster, thicker, stronger and shinier. It can detangle hair ...

END_OF_DOCUMENT_TOKEN_TO_BE_REPLACED

Castor Oil in Soap Making Castor oil is a staple in soap making. Soap makers looking to stabilize or sustain lather that is low, den...

END_OF_DOCUMENT_TOKEN_TO_BE_REPLACED

Argan Oil Benefits & How to Use

Argan Oil Benefits & How to Use Argan oil is famous for its skin moisturizing and repairing attributes. Known around the world as ...

END_OF_DOCUMENT_TOKEN_TO_BE_REPLACED

Where to Buy Carrier Oils in Singapore

Where to Buy Carrier Oils in Singapore Carrier oils are used to dilute essential and other oils prior to topical application (it's imp...

END_OF_DOCUMENT_TOKEN_TO_BE_REPLACED

Where to Buy Argan Oil for Face in Singapore

END_OF_DOCUMENT_TOKEN_TO_BE_REPLACED

Organic Coconut Oil for Face When you think about the health benefits of organic coconut oil, you may not be thinking of applying this...

END_OF_DOCUMENT_TOKEN_TO_BE_REPLACED

Almond Oil for Skin Almond oil can help improve complexion and skin tone due to it's highly emollient properties. Not only is it antib...

END_OF_DOCUMENT_TOKEN_TO_BE_REPLACED

Shopping cart
close
Sidebar
Start typing to see products you are looking for.